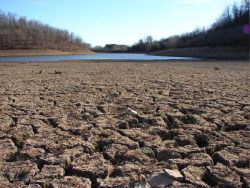 "El Niño weather event is biggest since 1997, may trigger soaking winter storms..." is the actual headline in the Mercury News.  As any California farmer would say, this is wonderful news. Yet in spite of all our advanced algorithms, satellites and data, the meteorologists are still offering only educated guesses, not facts. Talk to our sagacious senior farmers, though, and you will be told that if the rain doesn't come this year, it will come next year, or the year after. The fact is, California is a generally arid region of extreme weather, and we have lived through droughts before. Now is the time farmers prepare for rain and conserving the water that does come.

With California desperate for relief from its punishing four-year drought, the trend is significantly increasing the chances that storms will drench the state this winter, according to a new report released by federal scientists Thursday. And scientists say the conditions are lining up in ways not seen since the winter of 1997-98, when downpours filled reservoirs and sent rivers raging during the last major El Niño. "That's good news for California," said Mike Halpert, deputy director for NOAA's climate prediction center in College Park, Maryland. "There are obviously no guarantees, but above-normal rainfall is becoming more likely."

The chances are now "greater than 90 percent" that El Niño conditions that began in March will remain through this winter, according to the monthly El Niño report from the National Oceanic and Atmospheric Administration. That's up from 85 percent last month and 50 percent from four months ago. "We are on the right path now. We want to see it continue to strengthen and build -- and certainly to not weaken any time before the new year," said California's state climatologist, Michael Anderson, who is with the state Department of Water Resources.

El Niño is a disruption in the weather patterns over the Pacific Ocean, when the ocean's surface warms more than normal. Those warm waters release heat, changing wind directions and the jet stream. Strong El Niños, which occur when the Pacific Ocean is the warmest, have historically been linked to wet weather in California and South America -- and droughts in Australia and Asia.

As El Niño conditions have continued to grow this year, Peru in recent weeks declared an El Niño emergency, warning of flooding that could begin there this summer. Citigroup and the United Nations have issued warnings about potential price spikes in wheat and other food staples that would result from reduced harvests in Australia and other countries. To be sure, California's next rainy season won't start in earnest for five more months.

And many of those will be hot summer months with a high fire risk because the worst drought since California became a state in 1850 has left grasslands and forests bone dry. Scientists also caution that promising El Niños have fizzled out in the past -- most recently last year.

But with each passing month, many scientists now say, this year is looking more and more like 1997. That year, an ocean area that scientists call the "3.4 region" along the equator near South America that is considered a key indicator of El Niño trends was 1 degree Fahrenheit warmer than normal from April to June. Over the same months this year, the water there was 1.6 degrees higher than average.

San Francisco received 47 inches of rain the winter of 1997-98, double its historic average and the most since 1862.
At the peak in the winter of 1997, the water along the equator was 4.1 degrees above average. And now supercomputers at NOAA, NASA and other world-leading scientific institutions are projecting the temperatures in that ocean region by November will hit close to that -- 3.6 degrees Fahrenheit -- the warmest since 1997.

John Lewis remembers that soaking winter of 1997-98. The owner of Commercial Gutter in Fremont was so swamped with calls from people needing gutter repairs during the relentless downpours that he had a six-month waiting list. "It was a frenzy," he said. "My guys were working seven days a week, 10 to 12 hours a day. I had to turn people away." Lewis, who also sells rain barrels and water storage tanks, said some homeowners are getting their gutters repaired now and mentioning the El Niño reports.

But could one soaking winter end California's drought in a year? It's possible if the state receives 150 percent or more above average rainfall, filling Shasta, Oroville and the state's other largest reservoirs, said Anderson, the state's climatologist. "The potential for runoff in the watersheds is larger than the storage capacity of the reservoirs," he said. The state's biggest reservoirs have filled quickly before. In 1978, one wet year ended the 1976-77 drought, Anderson noted. And, he added, in 1993, heavy rains brought the 1987-92 drought to a close.

Last month's heavy storms in Texas dumped 11 inches of rain on Houston in one night, killing more than 20 people but ending a lengthy drought. But to end California's entrenched dry spell, the rain would probably have to start around Thanksgiving, saturating the ground to allow steady runoff into rivers and reservoirs. And then the storms would have to be cold enough to bulk up the Sierra snowpack so that the melting spring snow will continue to fill reservoirs.

Even then, the rainfall deficits of the past four years wouldn't be completely erased, and groundwater that has been overpumped during the drought could take 10 years or more to replenish, Anderson noted. But the emergency situation now plaguing farms and cities would largely pass with full reservoirs.

So what became of last year's El Niño predictions, which never panned out? The water was warm, but it didn't trigger significant changes in wind directions or the jet stream in the atmosphere, experts say. But this year, those changes are already underway.
"It's well coupled with the atmosphere. That never happened last year," said Jan Null, a meteorologist with Golden Gate Weather Services in Saratoga. "We get our rain from the atmosphere, not from a warm ocean. The fact we are seeing the coupling is one of these checked boxes that is pointing toward a strong event."

This article was originally written by Paul Rogers (This email address is being protected from spambots. You need JavaScript enabled to view it.), and posted to the San Jose Mercury News on July 10, 2015.