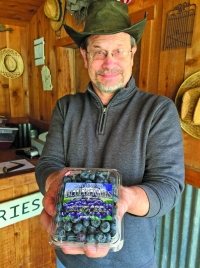 When Ed Seaman took over Santa Barbara Blueberries, his family’s blueberry farm five miles south of Buellton, he didn’t know much about farming. His background was in marketing and technology, but he had a passion for agriculture and an appreciation of how hard farmers work to provide food. “I became heavily involved in talking to other farmers and started attending the agriculture commissioner’s meetings. I realized, though, the people that should be there couldn’t because they were farming, and it occurred to me someone needed to be an advocate for them,” Seaman said.

Agriculture contributes $2.8 billion to the Santa Barbara County economy, according to the agricultural commissioner’s office. The county has 1,597 farms, which total more than 700,000 acres, that grow strawberries, grapes, berries, flowers and vegetables. More than two-thirds of those farms are “small family farms,” which are less than 200 acres.

“When we went to the big chain grocery stores to have them sell our products, we realized they didn’t want our product because of the price. They could buy from a bigger grower and keep the prices way down. As the small family farm gets pushed out, it’s seldom replaced. In reality it gets developed or turned into concrete,” Seaman said. The only chain-store exception was Whole Foods, which sold his blueberries at a higher price, and he said they broke records with how many blueberries they sold. “People want to know where their food comes from and the farmer that grows it. Whole Foods’ management team came to see why sales were higher, but it’s honestly about supplying quality local food,” he said. Farming is more than just growing food for Seaman. He believes it saves the planet because as farmers rotate their crops and disc fields, they help lessen the impacts of carbon dioxide and climate change. “What better way to save the planet than by farming it and growing good-quality food and providing for the local economy?” Seaman exclaimed.

Urban-agriculture farms are especially important because they help the metropolitan population get a closer look of how farming works.

“Places like Fairview Gardens in Goleta are a perfect example because they farm a few acres but people support them because of their proximity to their neighborhood and they can go there and learn,” Seaman said. Seaman said he studied a census by the U.S. Department of Agriculture that reported there has been an average loss of 533 farms per year over a 15-year span. “Loss of our quality local food supply is bad enough, but we are also displacing the most effective and loving stewards of local ecosystems, the small-scale farmer,” he said. He is looking for more small family farms to join his coalition and those that are passionate about sustaining local food sources. He also plans to host his first Blueberry Festival in the summer of 2017 to raise funds for the foundation

This article was originally written by This email address is being protected from spambots. You need JavaScript enabled to view it. and published in the June 2016 edition of the santaynezvalleystar.com